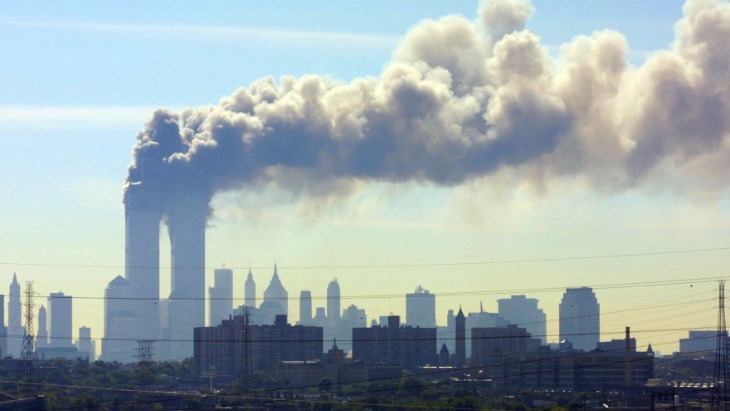 And then, there are seminal moments in the life of a nation that become indelibly impressed in the minds and hearts of every member of that nation or people.  Some will never forget where they were when Kennedy got shot, or man landed on the moon, or the challenger blew up.

Anyone alive at the time remembers exactly where they were and how they felt on September 11th, 2001. I will never forget watching the events of that fateful morning unfold and being gripped by the thought that this very well could be the end of the world.  First, we all heard that a plane had crashed into the world trade center.  Nobody knew that it was a jumbo jet, intentionally guided like a missile by terrorists seeking to annihilate and destroy.  Initial reports thought it could be a small private commuter plane that accidentally went off course.  That wishful thinking was quickly negated when news of the second plane hitting the second tower came in.

As we learned about a third plane hitting the Pentagon and fourth brought down by passengers in Pennsylvania, the entire nation was drawn to their TV’s and the horrific images they portrayed. Millions of Americans were watching by the time the unimaginable unfolded before our very eyes. We watched the towers collapse and with them, the lives and dreams of countless individuals and their families.

Mark Rosenberg, of blessed memory, a guy I was friendly with growing up, was killed that day at 26 years old, leaving behind his young wife, Jennifer. In all, 2,977 people were murdered that morning 20 years ago, but the real casualty number, how many were injured, how many traumatized and scarred for life, how many spouses, children, parents and extended family members who have yet to put the pieces back together, that number will never be known.

It wasn't the end of the world, but it was the end of the world as we knew it.  Over the last 20 years, our lives have significantly changed between security in airports, the difficulty of getting passports and visas, and perhaps most of all, the sense of suspicion, doubt and fear instilled in the American psyche until this very day.

As much as September 11, 2001 is etched into my memory, September 12, 13, 14 are equally impressed upon my mind.  Who can forget the pride we felt in being Americans?  It seemed everyone was flying the American flag outside their home or on their car. “God Bless America,” and “Proud to be an American,” played at every gathering including the baseball playoffs held in Yankee Stadium just a short time later.  NYPD and NYFD hats could be seen all over the country.

In the days and weeks following 9/11, civility and graciousness were at an all-time high, particularly in New York which some would consider no simple feat.  Neighbors went out of their way for one another, Government agencies and their employees were deeply appreciated by those who needed their services, members of our military, policeman, fireman and first responders were revered.  The sense of unity among the more than 250 million Americans was extraordinary.

Fast forward 20 years to today.  Once again, the American people face a crisis but this time it isn’t ours alone, it is shared by humanity across the globe. For the last nearly two years, the threat has not been from a visible enemy, but from a virus.  Facing this universal danger should have brought us all closer together, it could have driven us to cooperate better, to feel more united, and to empathize with one another.  Instead, for too many the virus itself became the weapon to judge, criticize, condemn and even to hate.  Sadly, this pandemic has driven people, even families apart.

Today, instead of feeling a sense of unity and togetherness, there is polarization, divisiveness, and discord.

Today, instead of the pride in being an American that followed September 11th, there are feelings of pessimism, cynicism and some who explicitly express shame in America for varying reasons. Rather than feel a sense of unity and togetherness, there is polarization, divisiveness, and discord. We too often forget that whether Republicans and Democrats, liberal or conservative, to the right or to the left, from a blue state or red state, we are still all Americans.  The utter lack of civility and basic respect in representing views on a myriad of issues and the manner in which we challenge those whose opinion oppose has grown toxic and destructive.

During these days we say U’vechein tein pachdecha, Hashem, let the entire world come together in fear and awe of You.  Extraordinary events should bring us together not only in mourning or grieving but in prayer, faith and surrender to the King who truly runs this world. Our hope and aspiration is to live in a time when all the nations will unite into a worldwide collaboration, ““V'yei'asu chulam agudah achas la'asos retzoncha b'leivav shaleim,” let us form a cohesive alliance to do the will of their Creator.

As we pause to remember 9/11, to honor those who lost their lives and to express gratitude to those who risked their lives for the freedoms and blessings we enjoy, I believe it is as important to remember 9/12 and 9/13, to reawaken those positive feelings of unity and togetherness, to recommit to practice civility and to feel and express profound appreciation for this country and for those who serve it.[1]

The enduring image of 9/11 must not be people falling from buildings but of a nation lifting each other up. Our differences were important 20 years ago, but we found the will to put them aside understanding that to maintain the strength of our nation demanded we focus on what unites us, rather than what divides us.  Unity, appreciation, faith and service are the true legacy of 9/11.

Our differences remain important today.  But if we are going to defeat this pernicious enemy, one that has taken many more American lives than the horrific events of 9/11, we need to stay focused on what unites us and on what we have in common.

[1] We, the members of the Jewish people, should feel especially proud and grateful to be Americans. The kindness, freedom and opportunity this great land has given to our ancestors and to us, creates an eternal obligation of deep appreciation and profound gratitude to us and for generations to come. Our ancestors were expelled from England, France, Austria, Germany, Lithuania, Spain, Portugal, Bohemia, Moravia and 71 other countries throughout Jewish history and we are blessed and fortunate to live in this great democracy.