January 13, 2022|י"א שבט ה' אלפים תשפ"ב A Time to Speak and a Time to Remain Silent By Rabbi Efrem Goldberg 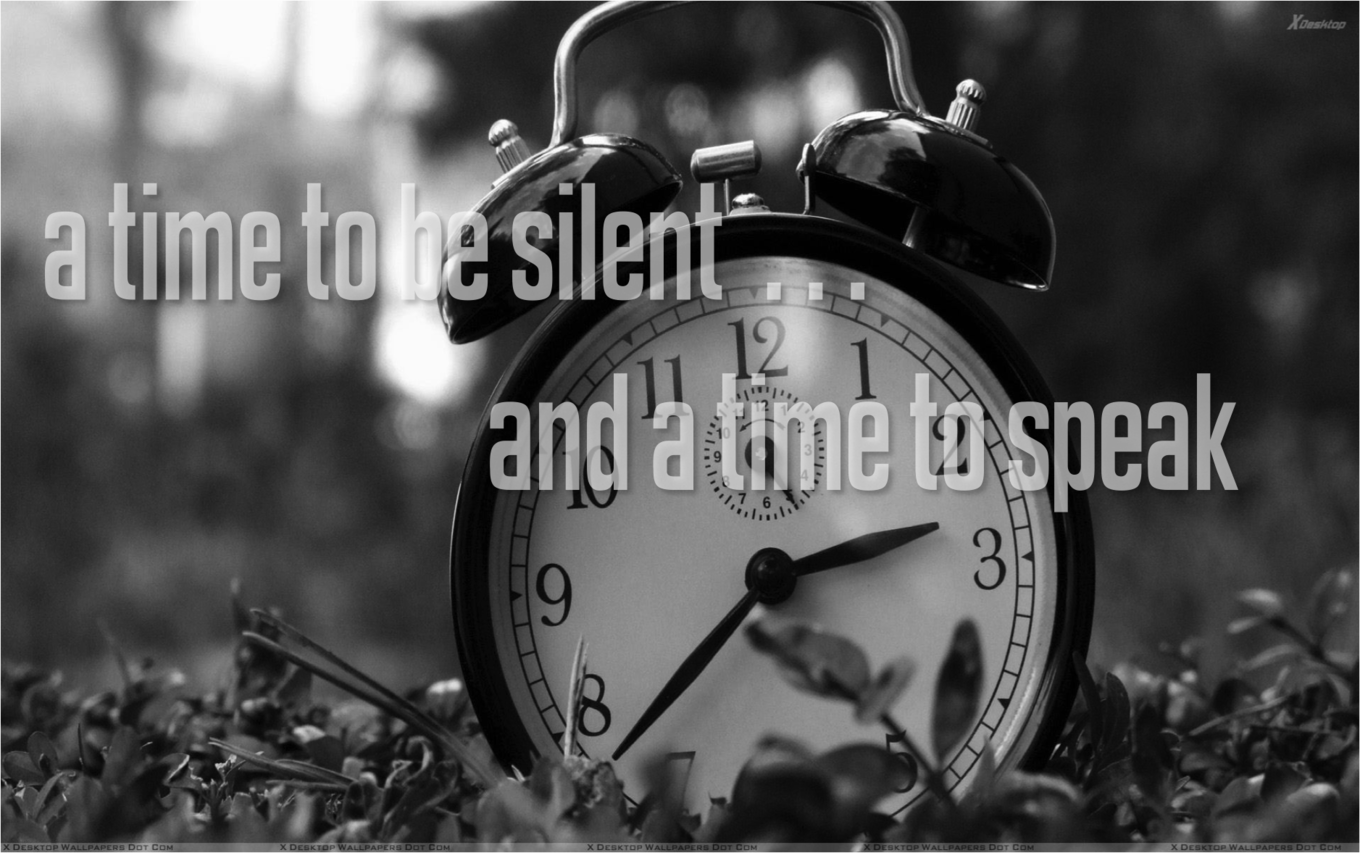 Martin Luther King, Jr., whose birthday we will mark this Monday, spoke powerfully about the danger and potential damage of silence.  He once said, “Our lives begin to end the day we become silent about things that matter.”  On another occasion he said, “In the end we will remember not the words of our enemies, but the silence of our friends.”  Both of these insights, individually and the combination of the two together, resonate deeply for me these days.

Whether Avraham Avinu speaking truth to the ultimate Power when he protested the impending destruction of  Sedom, Moshe challenging Hashem about why bad things happen to good people, Moshe and Aharon confronting Pharaoh, Esther and Mordechai taking on Haman, the Chashmonaim standing up to the Syrian Greeks against all odds, or countless other examples, we come from a tradition of not being silent when injustice is being perpetrated against anyone, and certainly not when it is directed against our people.

That is why this week nearly 1,000 people came together to raise our unified voice in support of Israel. In August 2014 during the war between Israel and Hamas, just two hours after Hamas agreed to a ceasefire sponsored by the United States and the United Nations, Hamas terrorists emerged from a terror tunnel, shot Hadar Goldin, a Lieutenant in the Israeli Defense Forces, and killed two other Israeli soldiers. Hadar Goldin did not survive this attack, and Hamas continues to hold Hadar and the body of another Israeli soldier slain during the 2014 Gaza war, Oron Shaul, for ransom.

Seven years have passed, and the families of these fallen soldiers are still struggling to obtain the release of their loved ones for return to Israel. Currently, a huge aid package to rebuild Gaza is making its way through Congress. Any US aid packages earmarked for the reconstruction of Gaza be expressly conditioned on the return of Hadar, Oron to Israel and their families as a non-negotiable pre-condition to the award of such aid.

There is a moral imperative to bring them home.  International humanitarian law requires the repatriation of missing soldiers and civilians; Jewish law requires us to make all efforts to bring the dead to their final resting places. Click here to find out how you get do more to get the bodies of our brothers home.

These are moments that demand we not remain silent.  Abuse, agunahs, antisemitism and other injustices demand we speak up and speak out.  Hashem has blessed us with voices, with influence and with access.  We must generate outrage, the most powerful commodity these days, and the only one that draws attention and demands action and reaction.

But while there are moments to overcome our silence and to express outrage, there are other times in which we would do better to be quiet than to react with indignation.

When the Jewish people miraculously cross the sea and emerge safely on the other side, they erupt in spontaneous song – Az yashir Moshe u’Vnei Yisroel.  In that song that we recite each morning in our prayers, we describe Hashem:

We typically understand the song as praising Hashem’s unique power.  For example, the Seforno writes: “Hashem’s incomparable stature consists in His ability to change the nature of phenomena in the universe which had previously been considered as indestructible, inviolate, impervious to any attempt by man to influence their nature in any way.”

But the Gemara understands our praise and awe of Hashem differently.  When the wicked Titus entered our Holy Beis HaMikdash and desecrated the Holy of Holies in unspeakable ways, Hashem was silent, He was passive and failed to react.  Why would the Almighty, the infinite, omnipotent, omniscient, all-powerful Hashem, do nothing when He could do anything?  Our rabbis explain (Gittin 56b):

Do not read “Who is like You God b'eilim,” among the celestials, but “Who is like You b'ilmim,” among the mute.  Hashem modeled for us the greatest strength, the most potent response – doing nothing. God showed us His power not by manipulating nature and controlling the world, but by self-control and discipline, to remain silent in the face of insult, defamation and even blasphemy.

He taught us that our greatest strength, too, is not in overreacting to being insulted— it is not acting at all.  Chazal teach (Shabbos 86) we should train ourselves to always be min ha'ne'elavim v'einam olvim, from those who when insulted don’t insult back; shom’im cherpasam v’einam m’shivim, hear the wrath against them, but don’t respond.

Save your outrage and indignation.  When it comes to a personal slight, a hurtful insult, let it go, walk away.  But how?  We get that nasty text, that hurtful email, the  aggressive comment we feel we cannot ignore. How do we stay silent?  How can we find the resolve to walk away, press delete, not match or escalate what has been cast our way?

The answer is found in something we say every day, three times a day.  We say at the end of the Amida – “v'limkalelai nafshi sidom, to those who curse me, may my soul remain silent.”  Why do we invoke nafshi, our soul? Perhaps we mention our soul because it is the source of our strength, our self-control.  We each have a tzelem Elokim, a Godly spirit, and just as Hashem shows His greatness by seeing His name and dwelling place desecrated and choosing not to respond, we can similarly find the inner strength and discipline to not respond and match the volume and vitriol, no matter how poorly we are mistreated.

The Zohar says that Hashem’s chariot has four legs, the first three are Avraham, Yitzchak and Ya’akov, and the fourth is Dovid HaMelech.  It is understandable that the patriarchs represent the first three legs, but why Dovid over Moshe, Aharon, and so many worthy others?

The Chafetz Chaim, in his Shemiras Ha’Lashon, explains that David Hamelech became the fourth leg of Hashem's Chariot when Shimi ben Geira hurled insults at him in public, and Dovid just ignored it.  Even when Dovid’s servants wanted to respond, Dovid told them, he couldn’t be cursing me and embarrassing me if Hashem didn’t want it to happen, so leave it.  There is a master plan, no need to respond.

Rav Pam says there are times we are meant to experience yesurin, suffering.  It can come in many forms - illness, financial collapse, relationship crises.  When it comes in the form of someone insulting us, we should sing and dance with joy that with all the options and alternatives, being insulted is our form of suffering.  What a gift and a blessing.  Lean into that insult, embrace it, and gladly take it and remain quiet.

Finding the capacity to remain silent, even when insulted, is an expression of true gevurah, of great strength.  When we dig deep and find that ability, it creates a very special moment. We have a tradition that when being insulted, instead of responding, escalating or matching the vitriol, we should take a deep breath and offer a prayer, ask for something in that propitious and providential moment in time.  That is when we are at our best and most worthy.  Don’t waste it by shouting or insulting back; prove your strength and take advantage of the opportunity to be worthy by asking for something important.

When it comes to antisemitism against our people and injustice against others, let’s vow to never be silent, but to stand up and speak out. Let’s hold our elected officials accountable. Not the ones in the other party, that’s easy. But calling up and calling out those in our party, the ones we identify with and voted for.  Object to the elected officials saying the wrong things and call up those who are remaining silent while their colleagues cross important boundaries.

But when it comes to being personally insulted, to absorbing a slight against ourselves, let’s learn to let it go, to show our true strength and be like Hashem, to be counted among the ilmim, those that are silent, and among the ne’elavim, those that are insulted but never insult back.