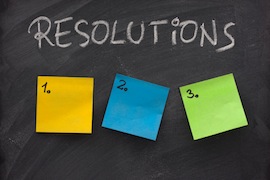 One December, Rav Yaakov Kamenetsky zt”l, asked his students what their New Year’s Resolutions were. The students were shocked: “Rebbe, this isn't the Jewish new year!” He responded, “The entire country is using this as a time for self-reflection and self-improvement, and we won’t?!”

We are almost a full week into our New Year’s resolutions for 2023.  How are yours going so far?  What did you resolve to change?  If you decided this is your year to lose weight and get healthy, you are not alone.  In fact, according to a recent survey, these are this year’s most popular resolutions (participants could elect more than one):

Do you know who the biggest beneficiaries are of new year’s resolutions?  Not the people who responded to the survey, or the tens of millions of people who took on new resolutions.  It is fitness retailers and gyms who see an enormous spike in sales and membership come the first week of January. Statistics show that by the beginning of February, almost 80% of the gym’s new members have stopped coming.

This attrition is hardly limited to weight loss or exercise resolutions. While 45% of Americans make New Year’s resolutions, only 8% are successful at keeping them and meeting their goals.  What is the difference between the 8% who succeed and the 92% who fail?  Is it conditions around them?  Are they programmed differently?

As Yaakov anticipates that his days are coming to an end, he gathers his children to bestow berachos upon them.  He likens his son Yehuda to a lion, the King of the animals and with that metaphor foreshadows that the monarchy will descend from Yehuda: “Gur aryeh Yehuda mi’teref b’ni alisa, kara ravatz k’aryeh, u’chelavi mi y’kimenu, a cub and a grown lion is Judah. From the prey, my son, you withdrew.  He crouched, rested like a lion, and like a lion, who will rouse him?”

Indeed, this week’s Haftorah tells the story of Dovid Hamelech a descendant of Yehuda, and the progenitor of the Davidic dynasty.

In describing Yehuda as a lion, Yaakov is highlighting that Yehuda’s personality radiated power, strength, authority, courage and prominence.  Like a lion, he was an invincible warrior, a triumphant King.

But what is Yaakov communicating with the imagery of karah ravatz, the lion crouching down and mi yekimenu, nobody can awaken him?  The simple understanding is that he is so powerful, so strong, that even when he is resting and crouched down, nobody dares to rouse him.

However, the Kotzker Rebbe interprets the pasuk differently.  He suggests Yehuda’s greatness and worthiness to be the source of Jewish monarchy is not his invincibility and infallibility, but exactly the opposite.  Says the Kotzker Rebbe, karah ravatz. He is not only a lion when he stands upright, but even when he falls, when he fails or makes a mistake.  Mi yekimenu, who can rouse him from his fall?  Nobody but Yehuda, who has the internal strength, resolve, tenacity and drive to pick himself back up and return to his relentless pursuit of success.

Rabbi Soloveitchik quoted this insight from the Kotzker and added that at Yosef’s sale, Yehuda acted not like a lion, but a coward.  He crouched to the ground and failed to show leadership. Yet, he rose by himself without anyone extending a helping hand.  He made a terrible mistake with Tamar, but he repented with a contrite heart.  He was not embarrassed to publicly confess, to admit the truth in front of all his friends and associates and say, Tzadka mimeni, she was more righteous than I.

Do you know what it means to see yourself as a lion?  You are not just a lion when you are on top of the world, things are going your way, you are in control, disciplined and living your best life.  Being a lion means even when down and out, even when undisciplined and falling, even when failing on resolutions and goals, you nevertheless still believe there is a lion in you, waiting to roar.  It means picking yourself up, rededicating yourself to the goal, the resolution, the commitment, the relationship, the promise or pledge.

But that is not us.  We are a stubborn people.  We have a sense of stick-with-it-ness.  The Sfas Emes quotes the Targum Yonasan on our Parsha who says this is in fact why we are called “Yehudim.”  Each one of us is a Yehudi, a descendant of Yehuda.  Even if you are a Kohen or Levi, you also descend from Yehuda.  We are called Yehudim because we have internal strength to elevate ourselves after we have fallen.  We have the will to stand back up and roar.  Says the Sfas Emes, the uniqueness of Yehuda was that after the episode with Tamar, he didn’t feel doomed, hopeless or despondent.  He wasn’t disappointed in himself or resigned to failure.  He was always ready to start anew, begin again and, as Yehudim, it is that strength and that conviction that he instilled in us.

Do you know what the difference is between the 92% who fail to fulfill their New Year’s resolutions and the 8% who succeed?  It is their belief in themselves as a lion, not only when all is going well, but even or especially when they hit a bump in the road.  It is the belief that if they are knocked down, if they miss a week at the gym, or cheat on their diet, or lose their patience, or have an impulse buy, that it isn’t all over, it just means, like Yehuda, having the will and strength to begin again.

Mi yekimenu - nobody can rouse the lion but himself.  Steve Salerno, author of “How the Self Help Movement made America Helpless,” demonstrates how believing the solution is outside of ourselves is not only not a solution, but actually promotes and reinforces the problem.  Certainly, there are tools, values, people, classes and books that can help us accomplish our goals and become the best version of ourselves.  But the changes that we are looking for must come from within ourselves.

Yehuda’s dignity and majesty were the result of his drive and determination.  If this is to be our year of making our resolutions come true, the answer is not anywhere but inside ourselves.  Research shows that you are 42 percent more likely to achieve your goal if you write it down.  Articulate it, make a plan to achieve it, ask others for help making you accountable with it, and most importantly, resolve in your heart that not if, but when, you get knocked off of it, you will roar like a lion and get right back on.