Two years ago, due to a very rare intersection of the Jewish and Gregorian calendars, Thanksgiving coincided with the first day of Chanukah resulting in a day that was popularly referred to as Thanksgivukkah. This week, similar to last year, a different overlap which occurs much more often will take place as Halloween falls on Shabbos. While Thanksgivukkah was widely embraced and broadly celebrated by many in the observant community, Challahween will go by without recognition or fanfare for what we think are obvious reasons, obvious until we try to articulate them. In contemporary times, Halloween seems to lack religious significance and serves only as a platform to have fun, dress up and collect candy. What is wrong with putting on a costume, being friendly with the neighbors and satisfying our sweet tooth? Unlike Thanksgiving, whose origins are consistent with our religious beliefs, Halloween began as the pagan Celtic festival of Samhain, a day on which the devil was invoked for various divinations. Encyclopedia Britannica says, “The souls of the dead were supposed to revisit their homes on this day and the autumnal festival acquired sinister significance, with ghosts, witches, hobgoblins…and demons of all kinds said to be roaming about.” Today, the overwhelming majority of those trick or treating and dressing up, not only have no pagan thoughts or intent, but don’t even know Halloween’s historical background. So again, if all my children or I want to do is put on a fun costume and knock on neighbors’ door to collect candy with no religious association, what is the problem? The Torah (Vayikra 18:3) cautions us from imitating chukas ha’akum, foreign practices and customs, not because we discriminate against non-Jews, but rather in an effort to preserve and support Jewish values, ideals and a distinctly Jewish lifestyle with pride.   The Rama, Rav Moshe Isserless, on his gloss on Shulchan Aruch (y.d. 178:1) rules that it is forbidden to observe a custom that has pagan origins, even in a secular context devoid of religious significance and meaning. Dressing up for Halloween and trick or treating are a perfect example of the Rama’s ruling and perforce are forbidden. The issue is not judging or rejecting the practices of our non-Jewish neighbors as much as seeking to reinforce distinctly Jewish practices and Torah values in our families and communities. Fascinatingly, despite Halloween’s designation as having pagan roots, several gedolim proudly distributed candy to those who knocked on their door trick or treating. The Artscroll biography of Rav Yaakov Kaminetsky describes how Rav Yaakov cheerfully handed out candy to all those who knocked on his door on Halloween. Rabbi Akiva Males recounts his father- in- law’s memory of being in Rav Pam’s home on Halloween night.

“When my wife’s older sister became engaged in the 1990s, my in-laws took my (future) sister-in-law and my (future) brother-in-law over to meet Rav and Rebbitzen Pam and receive their bracha and good wishes. What’s the most vivid memory they all have of that evening? It was October 31st. In contrast to the many Jewish homes around the Pams who had turned off their lights to discourage trick-or-treaters, the Pams left their front light on. While they all chatted with Rav Pam in the dining room, his Rebbitzen was in the kitchen working the hot-air popcorn popper and preparing plastic baggies of popcorn to give out with a smile to all the local non-Jewish kids who knocked at their door.”

How do we reconcile the prohibition of observing Halloween with the stories of great rabbis responding so positively to trick or treaters? Avraham Avinu, the founder of ethical monotheism and the father of our people, when purchasing a grave for his wife, described himself as “ger v’toshav anochi imachem, I am a stranger and a resident together with you.” Rabbi Yosef Dov Soloveitchik zt”l explains that in this introduction Avraham captured the tension that every Jew is destined to live with forever.  On the one hand, we are toshavim, residents and inhabitants of the great countries in which we live.  We function as active citizens participating in the fullness of the society around us.  And yet, at the same time, we must remain geirim, strangers: different, apart, distinct and dissimilar.  Ger v’toshav – we are to simultaneously be part of, and apart from, the general world around us.  Striking the proper balance and equilibrium between our dual identities and roles is the mission of the Jew at every time and in every place that he or she has ever lived. There have been periods in our history in which we didn’t need to work hard to remember that we were different.  Through their anti-Semitism, persecution and oppression, our hosts have often reminded us that we were geirim, we were not the same.  As badly as we tried to blend in, as hard as we tried to assimilate and as much as we sought to merge with those around us, we were denied the opportunity to be toshavim, equal residents and citizens.  Indeed, the imbalance which tilted towards being geirim, towards being different, was our default status for the bulk of our history. And yet, at this moment in history, blessed to live in this great country, a truly exceptional place that has afforded us extraordinary opportunity, once again our balance is off, our equilibrium between ger v’toshav, stranger and resident, is out of alignment. This time, it is in the opposite direction with devastating results, as evidenced by the recent Pew study. The observant community is not immune from the draw of assimilation and the temptation to do what everyone around us is doing, particularly when it seems as innocuous as dressing up and collecting candy. But it is specifically when things seem innocuous that in some ways they are the most threatening. As part of a general movement in America away from particularism and towards universalism, there has been a shift in recent years from December greetings of Merry Christmas to a more generic Happy Holidays. At first blush, as Jews one might think we should be grateful for the nonspecific greeting which seems more sensitive to those who don’t practice Christmas. 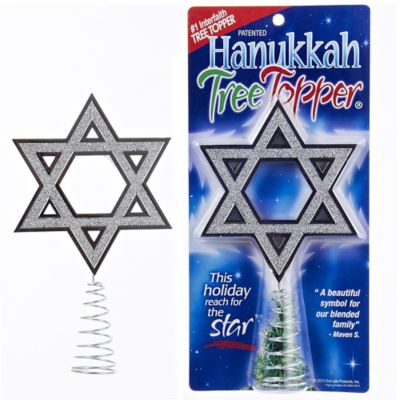 However, I submit to you that, in fact, changing the greeting to Happy Holidays combined with the overall secularization and commercialization of much of Christmas doesn’t serve the Jewish people; it threatens to blur the lines that we rely on to distinguish us. The more secular Christmas becomes, the more accessible and inviting it will be to Jews who may someday have a tree and leave gifts under it, arguing that it has no religious significance to them.   Disturbingly, Bed Bath and Beyond is selling a Hannukah Tree Topper that it markets as the "#1 interfaith tree topper." All one has to do is survey the young people who are struggling mightily with the rigorous expectations of observant Judaism and the traditional viewpoints of Torah towards many social issues of the day to realize how threatening the allure of being a toshav is and its impact on our religious community. Our generation needs to place a greater emphasis on the ger aspect of our identity, not out of a sense of retreat, isolationism or defensiveness, but with pride, excitement and enthusiasm for our Jewish holidays, practices and customs. Recognizing our role as geirim, different and distinct, Rav Yaakov and Rav Pam most certainly would never endorse or permit Jews to trick or treat or dress up for Halloween. Yet, they understood that, at the same time, our identity as toshavim demands that we not turn out the lights, literally or metaphorically, when our non-Jewish neighbors knock on our door, but instead we greet them with warmth and cheerfulness. On Challahween this year, I suggest we follow the example of our great leaders. We should graciously give candy to those who knock on our doors, while abstaining from dressing up or trick or treating ourselves. Let’s use this Shabbos around our tables for a meaningful dialogue about the challenges of being geirim and toshavim at the same time. Let’s share ideas and strategies about how we can best preserve our Jewish identity and practices with pride, without having to forfeit our participation in and concern for the society around us. (Re-posted with modifications from 2014)