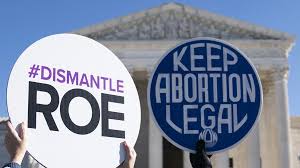 The country was stunned this week when the draft of a Supreme Court decision overturning Roe v. Wade was leaked.  The sharing of something private is not only a potentially legal breach, but Judaism views it is an egregious moral and ethical violation.  The Talmud (Sanhedrin 31a) teaches that when judges arrive at the conclusion of a case, it is forbidden to disclose the confidential deliberations.  It is a violation of the wise words of Shlomo HaMelech who said, “Holeich rachil megaleh sod, a base person reveals secrets.”

While the American legal system not only allows for but requires transparency as to judges’ votes and reasoning, sharing and revealing drafts that are not final, likely with the intent to influence the outcome, is base, repugnant, and corrupts justice.

Not surprisingly, the public outcry erupted in both directions, with some celebrating and many others calling the upcoming decision an atrocity and a gross violation of women’s rights.

There are legitimate debates to be had surrounding the legal, moral, and religious implications of abortion, but sadly, instead of those conversations, media and social media have lit up with both sides using this topic to score political points and advance other interests that only barely intersect with this topic.

Fundamentally, abortion comes down to two questions: when does life begin and who gets to determine when life begins?  Leaving faith aside for the moment, from a strictly legal standpoint, one could argue the determination of this question should reflect the will of the people, as defined by the people elected at the federal, state, or local level. Or, one could argue the woman who carries the child, or the man who contributed half the genetics and bears financial responsibility for that child, or maybe the two together, get to follow their definition.  You could argue life begins at conception, at forty days after conception, at three months or six months or even birth; the exact moment can be debated.

But, whatever one concludes is the correct answer, one’s position on abortion should not be, nor should it be seen as, maintaining a supportive attitude towards women or trying to deny them autonomy, it cannot be about left or right or political affiliation, it should be purely about the definition of life and by extension the question of when is one considered to have ended a life.

Despite the irresponsible way many have portrayed it, Judaism and Jewish law are far from monolithic in answering these very questions and addressing this fundamental issue. One thing all opinions agree on is that the definition of life is not relative, not subject to a vote, or popular opinion.  It is not the result of a feeling or a desire.  It is not a matter of choice. And it certainly does not change based on whatever modern social norms dictate.

The well-known Gemara in Shabbos mentions that one of the questions we are asked upon entering the next world is “Kavata Ittim L’Torah, did you establish time for Torah study?” Some commentators understand the question homiletically: Did you properly maintain the immutability of Torah no matter the time period or, conversely, did you kovea, establish the Torah l’ittim, reinterpret the Torah based on the time, on what society deemed acceptable.

As people of profound faith not only in God but in His authoritative, objective, and immutable laws, the question of abortion and its many implications must reflect our best attempt to understand His will, not ours.

In answering the question of when life begins, there are authorities of Jewish law (Igros Moshe c.m. 2:69) who see a fetus as having a life, and abortion therefore as murder.  Even those authorities still hold abortion is, in rare circumstances, still permissible to save the life of an innocent person who is threatened; as a result, even those who see the fetus as being alive will allow it to be aborted if the mother’s physical, and at times mental health, is in danger.

Others (Chavas Yair 31) see the prohibition of abortion not as extinguishing a life but aborting a potential life and prevented it from developing into a full life, essentially a prohibition of wasting seed.  The diversity of positions is reflected in varying Halachic conclusions among revered decisors regarding cases of severe disease, psychiatric illness, rape, mamzerus, multiple pregnancy, fetal reduction, and more.

And so there are legitimate debates and robust conversations worth having in the general public sphere and within the Halachic one.  What is not legitimate is to hijack Judaism or our sacred Torah to distort and oversimplify its view and to present it as clear cut when it is anything but.  In Pirkei Avos, our rabbis warned us not to turn Torah into a kardom lachpor bahem, a spade to dig with, a weapon to beat others with, or an instrument to manipulate the world with. Brazenly presenting an inaccurate view of the Torah’s approach to abortion is more than just a disservice to Hashem and His people, it is a violation of being megaleh panim b'torah shelo k'halacha, misrepresenting Torah, something R’ Shlomo Luria (Yam Shel Shlomo, Bava Kama) saw as a capital crime.

The reality is that Judaism and the Torah don’t fit neatly into either the pro-life or pro-choice camp.  Most certainly, the Torah recognizes the inestimable value of both life and even potential life.  It therefore sees a gestating fetus post forty days as much more than embryonic fluid that can casually be disposed of because of convenience, comfort, or regret.  It, and we, are morally obligated to fight for life and potential life, to protect the most vulnerable including the unborn who cannot advocate and fight for themselves.

In an article on abortion, Rav Aharon Lichtenstein writes:

Judged by the standard prevalent today in most of the world, at least in the Western world, the Halakhic approach presented here appears rather stringent.  This requires no apologetics.  But it is worth making clear, certainly to those who, in seeking a humane approach, are liable to adopt slavishly an overly liberal attitude in this area, that from the perspective of the fetus and those concerned with its welfare, liberality in this direction comes at the expense of humanity, insofar as the caution of Halakha is tied to its intimate concern for the values of kindness and mercy.  It is not only the honor of God which obligates us, regardless of the cost to avoid what is prohibited  and to obey the commands of the Almighty that are expressed in this Halakha.  It is also the honor of man in Halakha, the humane and ethical element which insists on the preservation of human dignity and concern for human welfare, that rises up in indignation against the torrent of abortions.

And yet, as we mentioned, the Torah and Jewish law unequivocally see exceptions, extenuating circumstances in which conflicting values or realities may lead to the conclusion that abortion, at rare times, is not only permissible but obligatory.  I have personally dealt with several cases in which some of the greatest Halachic authorities of our generation ruled that abortion was the correct, appropriate course of action.

And so, because Judaism rejects the notion of pure choice while strongly embracing protecting life with rare exceptions, it  ultimately is neither pro-life or pro-choice in the classic political sense. The Halachic approach to abortion is nuanced, complex, and responds to the specifics and sensitivities of particular situations.