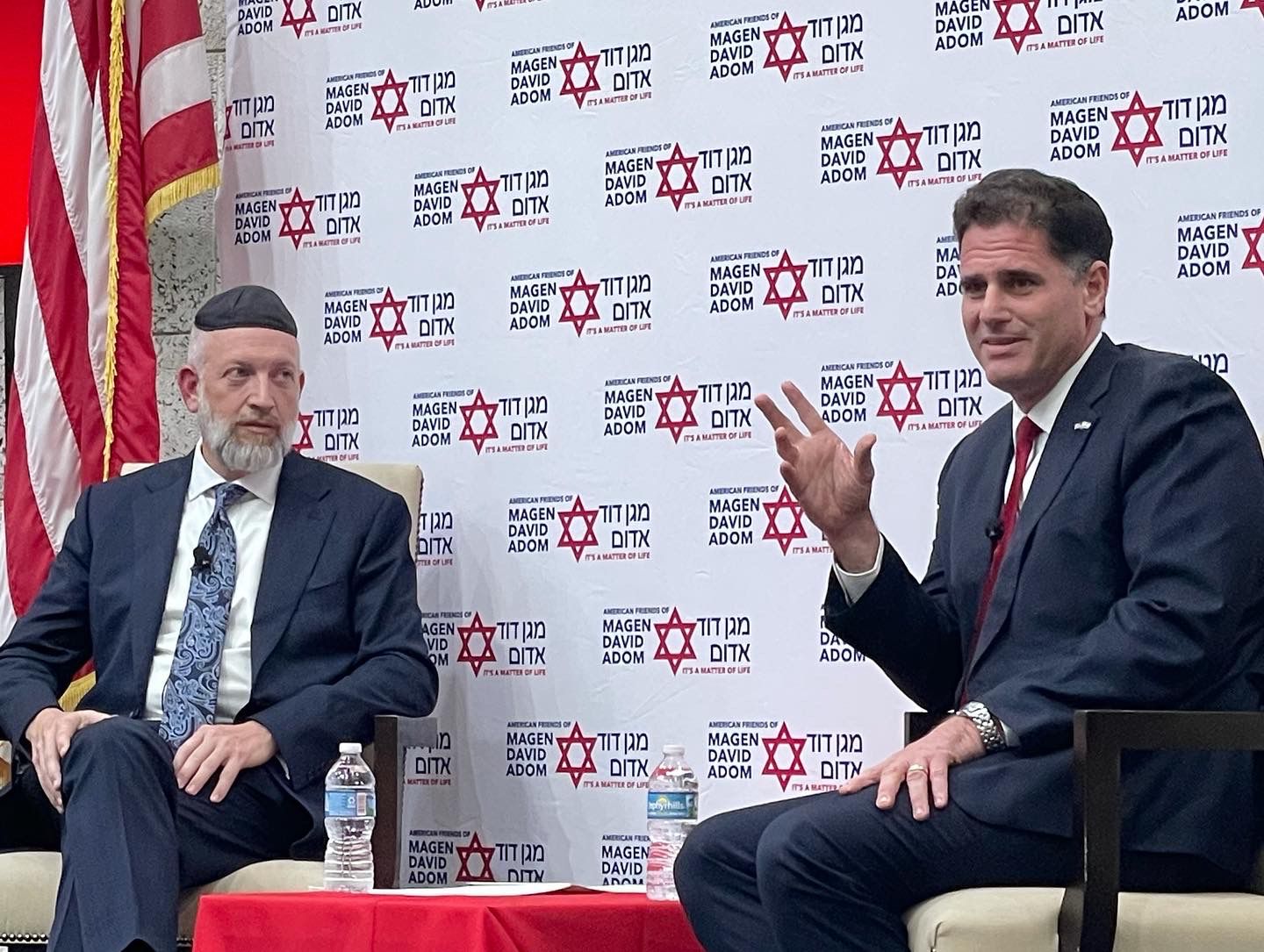 A couple of years ago, Bibi Netanyahu was quoted as saying there are only two men he considers fit to lead the State of Israel and one of them is Ron Dermer.  We had the great privilege of hosting Ambassador Dermer at Boca Raton Synagogue this week and after meeting him and hearing his insights, analysis, and reflections, it is clear why Prime Minister Netanyahu felt that way.  During his seven-and-a-half years as Israel’s Ambassador to the United States, Dermer wasn’t just a diplomat and outstanding spokesperson for Israel, he helped shape historic policies and nurtured major peace initiatives.

Following his presentation, I had the chance to sit with Ambassador Dermer and my daughter Tamar to discuss ways young people can get involved in advocating for Israel in a meaningful way.  Not surprisingly, the ambassador made some excellent suggestions and gave tremendous encouragement regarding the long-term impact of influencing even one opinion, even when you don’t realize it right away.  He then shared a story to illustrate his message that had a tremendous impact on me.

In 2015, while he was ambassador, he lobbied feverishly against the Iran deal that Congress was going to vote on.  He met with countless members of Congress, scheduling a half-hour with each one in an effort to persuade them to vote against what he felt was a deal that left Iran with a clear path to a nuclear weapon.  He went in to see a particular congressman and thirty seconds into the conversation, before he could even begin to make his pitch, the congressman said, “You don’t need to try to convince me, I plan to vote against the deal.”

Somewhat startled, Dermer recalled thinking to himself, I have twenty-nine and a half minutes left, and so he naturally asked the congressman what made him take what was an unpopular position among his party. The congressman explained that he immigrated to America when he was fifteen years old and lived in a neighborhood of immigrants. Few people gave them the time of day, they were treated downright rudely and with hostility by others, and nobody allowed them to play on their basketball courts.  There was one exception.

“There was a synagogue in our neighborhood,” explained the congressman, “and the members greeted us warmly and respectfully. They invited us to use their basketball court and they treated us with dignity.  Since I was fifteen years old, I have been determined to always stand with the Jews and to stand with Israel and that is why I am voting against the Iran deal.”

Ambassador Dermer then pointed out the members of that shul were enormous Israel advocates who influenced the US-Israel relationship without even realizing it, just by being good people.

Those learning Daf Yomi recently studied a Gemara (Taanis 21b) that teaches how we may not appreciate the impact of our behavior and the merit it brings to others, even when we think nobody sees:

Once there was a plague of pestilence in Sura, but in the neighborhood of Rav there was no pestilence. The people therefore thought that this was due to Rav’s great merit. However, it was revealed to them in a dream that Rav’s merit was too great and this matter too small for the merit of Rav to be involved. Rather, his neighborhood was spared due to the acts of kindness of a certain man, who would lend his hoe and shovel to prepare sites for burial.

Rabbi Paysach Krohn tells the story of a Conservative Jew walking into an Orthodox shul in Dallas, Texas.  The man introduces himself to the rabbi and presents a large, unsolicited donation.  The rabbi was stunned by the unexpected gift and explained that the shul had a great need to renovate an educational wing but didn’t have the startup money.  “Your donation,” he said, “is going to turn this project into a reality, but I am very curious about who you are and why you chose to make a large gift to our shul?”

The man explained that he made his first trip to Israel a few months back and ended up at the Kotel. He said, “As I took in the sights around me, I noticed a Yerushalmi Jew standing and davening in silent devotion.  I had never witnessed someone praying so fervently or with such meaning.  I was mesmerized and entranced.  But even more, I was inspired.  I determined right then and there that when I got home, I was going to make a donation to a shul in honor of that Yerushalmi Jew.  When I returned I thought to myself, if that Jew were here in Dallas, where would he be comfortable praying, and I looked in the Yellow Pages for an orthodox shul and came up with you.”  That man ultimately became more observant and continued his generosity in building the Torah institutions of the community.

Reflecting on the story, Rabbi Krohn invites us to imagine what happens when the Yerushalmi Jew comes before the Heavenly court after 120 years in this world.  He will be greeted enthusiastically with a hero’s welcome.  He will be rewarded for transforming Judaism in Dallas, Texas and for all the Torah learned by thousands of people, and by all the davening that took place in the Shul that he supported. He will undoubtedly turn to the Heavenly Judge and say, there must be a mistake, I have never even been to Dallas, Texas.  I don’t even speak English.  He will only then learn the impact of the impression and inspiration he spread when he davened so sincerely and fervently at the Kotel that fateful day.

Our actions have cosmic implications. The small acts of kindness and virtue we engage in can make the biggest difference not only to ourselves, but to all of humanity. In 1963, meteorologist Edward Lorenz introduced what he called the “butterfly effect.” He showed that the flapping of a butterfly’s wing in Australia can cause a tornado in Kansas, a monsoon in Indonesia, or a hurricane in Boca Raton. Lorenz’s thesis is part of a greater theory called chaos theory that essentially posits that small acts can have large outcomes. Chaos theory is applied in mathematics, programming, microbiology, biology, computer science, economics, engineering, finance, philosophy, physics, politics, population dynamics, psychology, robotics, and meteorology.

Chief Rabbi Jonathan Sacks has applied chaos theory in one more realm. In his book “To Heal a Fractured World,” he coined the phrase “chaos theory of virtue,” demonstrating how small acts of kindness and virtue can have immeasurable consequences on the world. Sometimes, as was the case with the donor in Dallas and the synagogue that was the basis for a pro-Israel vote, we see the consequences and impact; more often than not, we don’t.

Our mission is to be kind, warm, welcoming and respectful, act with virtue and righteousness always.  Among many other reasons, you never know who is watching or how it will impact their attitude to Jews or Israel.