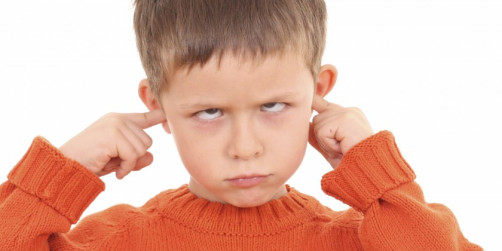 Ralph Waldo Emerson once said, “What you do speaks so loudly that I cannot hear what you say.”  When we say one thing and communicate a different message through our actions, priorities, and values, we drown out our own voices.  There is no instrument more finely calibrated to detect hypocrisy and duplicity than a child.

Our Parsha tells the story of the rebellious son.  Our Rabbis teach us that the criteria to qualify for this label have never been and will never be met and that such a child exists only theoretically.  Yet a series of pesukim are dedicated to this subject because there is so much to learn and glean about parenting and education nonetheless.

Rashi tells us the term soreir comes from sar, he has drifted from the path, he is not meeting our expectations and hopes.  The Torah tells us he does not and cannot hear kol aviv u’kol imo, the voice of his father and the voice of his mother.  The Torah never wastes a word and yet it could have said b’kol aviv v’imo, he doesn’t listen to the voice of his father and mother.  It must be that the second use of kol, voice, is not redundant or extraneous at all.  Rather, there is in fact a separate kol aviv, a message and values of the father, and a kol imo, a message and values of the mother.

When children receive mixed messages, inconsistent and contradictory values, everything becomes incoherent.  They then stop paying attention and begin to be soreir, drift, until it ultimately leads to moreh, rebellion.  It is not only parents that influence and raise a child but it is the grandparents, the school, the shul, and all the adults in the community to whom they turn for modeling and for inspiration.  We must be on the same page and project a consistent message of what our values are, what we are all about, and what we expect from them.

The Ohr HaChaim Ha’Kadosh, Rav Chaim ben Attar, notes that the passuk does not say eino sho’meiah but einenu sho’mei.  There is a big difference between the two.  Eino means he doesn’t, einenu means he can’t, there is a blockage preventing the message from penetrating.  Our children and grandchildren literally cannot hear what we say when our contradictory actions are much louder.

If your child or grandchild ask you – do you care more about my being happy and successful or my being kind – what would you answer?  I would hope they would hear us answer being kind.  And yet, though our voices may be saying that, we are clearly articulating another message.  According to a recent study done by researchers at the Harvard Graduate School of Education, when asked if their parents care more about achievement and happiness or if they were kind to others, 80 percent of children said their parents care more about achievement or happiness.  In the same study, children were far more likely to rank “hard work” above fairness.

The study concludes: “But when youth do not prioritize caring and fairness over these aspects of personal success — and when they view their peers as even less likely to prioritize these ethical values — they are at greater risk of many forms of harmful behavior, including being cruel, disrespectful, and dishonest. These forms of harm are far too commonplace. Half of high school students admit to cheating on a test and nearly 75% admit to copying someone else’s homework.  Nearly 30% of middle and high school students reported being bullied during the 2010-2011 school year.

“At the root of this problem may be a rhetoric/reality gap, a gap between what parents and other adults say are their top priorities and the real messages they convey in their behavior day to day… And here’s the irony: the focus on happiness, and the focus on achievement in affluent communities, doesn’t appear to increase either children’s achievement or their happiness.”

Dr. Richard Weissbourd, one of the authors of the studies, states, "We should work to cultivate children's concern for others because it's fundamentally the right thing to do, and also because when children can empathize with and take responsibility for others, they're likely to be happier and more successful, they'll have better relationships their entire lives, and strong relationships are a key ingredient of happiness."

Rav Shamshon Raphael Hirsch notes that the Torah describes the ben sorer u’moreh not only as a rebellious child, but as one who is zoleil v’sovei, gluttonous and indulgent in meat and wine. Rav Hirsch explains that the inappropriate emphasis in the home on food and drink, success and indulgence, leads to rebelliousness. Parents, he says, must be much more concerned with their child’s values, behavior, sensitivity, and kindness than with the quantity and quality of the food their child is eating.  We focus on our children being well-fed, well-dressed, and happy, all of which are important. But we must focus even more on who they are and how they behave than on their happiness.  They need to know that we care more about their concern for the happiness of others than for their own happiness.

1.     Children and youth need ongoing opportunities to practice caring and helpfulness, sometimes with guidance from adults. Learning to be caring is like learning to play an instrument - it needs daily repetition.  Encourage your children to help a friend with homework, pitch in around the house without a connection to a reward (like allowance), and to volunteer in some capacity.  When you speak to your child or grandchild at the end of the day, don’t just ask how they are doing on their grades and tests but ask them if they did anything kind that day for someone else.

2.     Children and youth need to learn to zoom in and zoom out.  They need to listen closely and attend to those in their immediate circle like family and friends but they also have to learn to zoom out and look for those who are too often invisible like a new kid in the class, or the school custodian who is largely ignored and feeling isolated.

3.     Children and youth need strong role models.  Veshinantem levanecha v’dibarta bam, b’shivtecha b’veisecha u’velechtecha baderech… The Torah obligates us to teach our children and we usually assume it is fulfilled with v’dibarta bam, by articulating and verbally communicating our values.  However, the truth is they learn much more from b’shivtecha b’veisecha, how we carry ourselves at home, the type of conversations we have, and activities we engage in.  They learn from b’lechtecha ba’derech, what we do on the road.  We should seek opportunities to share moments in our day when we were kind to another or when we were the recipients of the kindness of another and how it made us feel.  If our deeds match our words our ideals will come across loud and clear.

4.     Children need to be guided in managing destructive feelings. Anger, shame, envy and other negative feelings arise and we need to teach children that those feelings are ok but must be dealt with constructively if they are to be resolved and not overwhelm their ability to care for others.

As our parsha emphasizes, Hashem cares as much – if not more – about our behaving with righteousness, justice, and kindness as He does about our observing His laws.  The best gift we can give our children is not making them believe the world is about them, but helping them learn the world is about helping others.

The parsha concludes with the laws of having honest weights and measures and describes one who doesn’t as a to’eivah, an abomination.  However, the verse uses two phrases – kol oseh eileh, kol oseh aveil, one who does “these,” and one who does “iniquity.”  Rav Menachem Bentzion Zaks, in his Menachem Tziyon, offers a novel interpretation.  The abomination, he explains, is when someone is oseh eileh, learns Torah and does mitzvos and yet, oseh aveil, is dishonest, lacks integrity, and is unkind.  God has no tolerance for such a duplicitous person.  To Hashem, it is repulsive and despicable to appear as a religious, observant individual and yet be rotten to the core when it comes to honesty and righteousness.

Wearing a kippa and going to Jewish school provide tremendous information, knowledge, and lessons.  Nevertheless, our children are ultimately molded most by what they think that we, their parents and grandparents, value most.  When our children are asked if their parents care more about achievement and happiness or being kind, let us do all we can to ensure that they know the right answer.