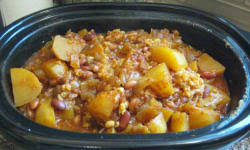 Someone picking the words at the Annual Scripps National Spelling Bee clearly has a heimishe palette.  In 2013, the winning word was “knaidel.”  In 2016, the winner had to spell the word “chremslach” correctly just to make it to the final.  And in 2018, a 13-year-old from Wyoming had to spell a word we know well  to make it on to the next round.

When he asked for the language of origin, he was told Yiddish.  Still stumped, he then asked for the meaning and the judge replied: "A Jewish Sabbath-day dish of slow-baked meat and vegetables." Confidently, the 13-year-old then said: “cholent, c-h-o-l-e-n-t, cholent.”

Whether you pronounce it and spell cholent with an “o” or a “u,” and despite the endless varieties and recipes, all agree it is slow cooked and it takes great patience before you can indulge.  In fact, according to some, the name itself indicates the patience needed to eat it. Some suggest “cholent” comes from the French chaud ("hot") and lent ("slow"). The opposite of cholent is “nonchalant,” which means cold and disinterested.

Patience is not only literally cooked into our food, it is a critical quality we must always be working on.  The Magen Avraham (o.c. 60:2) follows the opinion of the Ramban that we are Biblically commanded to remember each day the episode of Miriam speaking Lashon Harah and her subsequentquarantine. Why?  The Chafetz Chaim suggests that our Parsha is a reminder of the severity of speaking gossip.  We remember the consequence for Miriam as a motivation to avoid Lashon Hara, gossip, ourselves.  Rabbi Soloveitchik preferred the explanation of Rav Kook (Olas Re’iah) that the purpose of remembering Miriam’s mistake is to remember never to question the singularity of Moshe and the authority of the mesorah in general.

There is a third possibility regarding what we are to remember regularly and why. After Miriam spoke Lashon Harah  about her brother Moshe and was struck with tzara’as, she was quarantined for 7 days.  While she was not part of the camp during that time, the camp stood still. They did not travel, they did not move forward without her.  In fact, the Ohr Ha’Chaim points out that the passuk  doesn’t say, ולא נסע העם, but rather וְהָעָם֙ לֹ֣א נָסַ֔ע, placing the nation first in the phrase to tell us that even though normally the people didn’t embark or journey until instructed by the clouds of glory, out of love and respect for Miriam, the people refused to leave without her.

Why?  Wasn’t it incredibly dangerous to stand still in the desert baking in the sun, depleting resources?  Why did 3 million people stand still, waiting for one person? The Mishna in Sota introduces the idea of midah k’neged midah, the idea that in life things happen measure for measure.  The Mishna then gives the example that in the merit of Miriam waiting to see what would happen to Moshe’s basket floating in the Nile, the entire nation waited for her for seven days.

What was special about Miriam waiting at the river?  Maybe she was curious what would happen.  Maybe she had nothing better to do.  Why did her staying earn such a great merit that the nation stood still for her?  The gemara tells us that we need to understand her waiting and watching in context.  Amram, Miriam’s father, was one of the great leaders of the generation.  When he heard Pharaoh’s decree to kill all Jewish male children, he gave up hope in the future and felt it would be unfair to bring another child into the cruel and harsh world.  He separated from his wife Yocheved in a fatalistic surrender.  Others heard and followed suit.

Miriam protested her father’s conclusion and told him his decree was more severe than Pharaoh’s, who had only decreed on the males.  Amram was persuaded and remarried Yocheved.  She conceived and gave birth to Moshe.  Again, everyone else followed their example. When Moshe was born, the house was filled with light and with promise.  Amram affectionately praised Miriam and told her that her prophecy had been fulfilled.

But then it came time to throw Moshe into the Nile, to hide him from being taken and killed.  At this point, Amram chastised Miriam and said, what did you do, why did you encourage us to have another child just to have to give him up in the desperate hope of his survival?  It is against this backdrop that we can appreciate Miriam standing at a distance to watch what would happen with her brother.  When things looked hopeless, Miriam had faith and convinced her parents to believe in a brighter future.  When once again things looked bad, again Miriam stood and watched with great faith and hope.  Miriam was rewarded, not just for standing on the bank of the river that day, but for her deeply rooted tenacity, faith and hope, and for her patience.   That patience paid off when she intervened and enabled Moshe to be raised by his mother Yocheved, even after being found by Pharaoh’s daughter.

What would have happened if Miriam had not waited and watched?  Moshe would have been raised as an Egyptian, and he would not have been sensitive to his people’s suffering.  The entire drama of the exodus might not have happened had Miriam not waited.  This is why, many years later, her patience and perseverance were repaid, by the people patiently waiting for her.

Vice Admiral James Stockdale was Ross Perot's running mate in 1992, but that is not his legacy.  In 1965, his plane was shot down over North Vietnam and he was taken as a prisoner of war.  Five years after Stockdale was captured, his teenage son, Jim, sought out a counselor's advice.  It seemed so unlikely his father would ever come home so he was told, "You may be better off just considering your father dead and gone."

Jim Collins tells the story in his book “Good to Great” where  coined the phenomenon “The Stockdale paradox.” Tortured over twenty times during his eight-year imprisonment from 1965 to 1973, Stockdale lived through the  war without any prisoner’s rights, no set release date, and no certainty as to whether he would even survive to see his family again. At one point, he beat himself with a stool and cut himself with a razor, deliberately disfiguring himself, so that he could not be put on videotape as an example of a “well-treated prisoner.” He exchanged secret intelligence information with his wife through their letters, knowing that discovery would mean more torture and perhaps death.

How did he deal with it when he was there and did not know what would be the end of his story?  Collins writes:

“I never lost faith in the end of the story,” [Stockdale] said, when I asked him. “I never doubted not only that I would get out, but also that I would prevail in the end and turn the experience into the defining event of my life, which in retrospect, I would not trade.”

Finally I asked, “Who didn’t make it out?” “Oh, that’s easy,” he said. “The optimists.”  “The optimists? I don’t understand,” I said, now completely confused given what he’d said earlier.

“The optimists. Oh, they were the ones who said, ‘We’re going to be out by Christmas.’ And Christmas would come, and Christmas would go. Then they’d say, ‘We’re going to be out by Easter.’ And Easter would come, and Easter would go. And then Thanksgiving, and then it would be Christmas again. And they died of a broken heart. This is a very important lesson. You must never confuse faith that you will prevail in the end–which you can never afford to lose–-with the discipline to confront the most brutal facts of your current reality, whatever they might be.”

That is the Stockdale Paradox – surviving what life throws our way requires maintaining the sometimes-contradictory attitudes of patience, hope and optimism on the one hand and realism and pragmatism on the other.

Nobody knows how to wait like the Jew.  For 2,000 years we longed to return to Israel and Yerushalayim, and we were ultimately rewarded by coming home.

Perhaps the mitzvah to remember Miriam’s episode daily is a mandate to remember that we are a people of patience and of hope and like Miriam, we will one day be rewarded for it.  That reward may come soon, it may come with time, and it may not even come until after our lifetimes, but the reward for patiently preserving hope while tenaciously confronting the harshness of whatever reality we confront will one day come.

Some of us are too rooted in realism and fall prey to Amram’s mistake of surrendering to the challenges and to the feeling that there is no greater meaning or plan.  Others practice too much passive optimism, believing everything will be ok while ignoring the realities of the moment.

We are progeny of Miriam. She waited for Moshe, our ancestors waited for her, and they both imbued within us the capacity and will to wait for Moshiach, b’chol yom achakeh lo, every day we wait for him to come.  For most of our history we have lived the Stockdale Paradox, ready to address the reality we confront, but never giving up our hope and belief in what is to come.

Always remember: Everything will be okay in the end. For if it's not okay, it is not yet the end.