May 31, 2022|א' סיון ה' אלפים תשפ"ב An Uncle’s Liver Donation Saved His Nephew’s Life – And His Own By Rabbi Efrem Goldberg 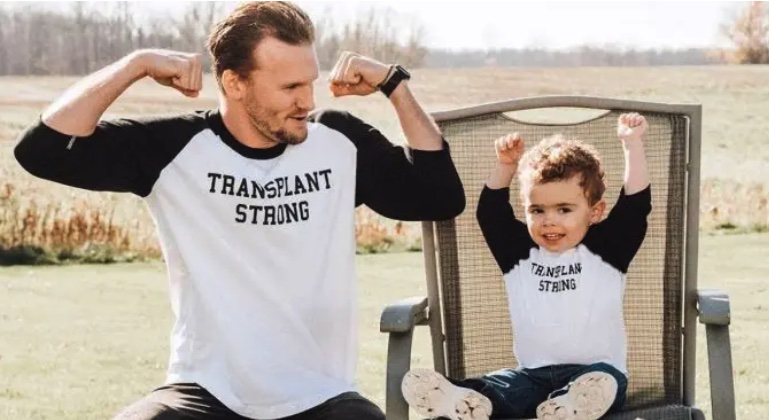 On November 6, 2019, Matt and Andrea Campell noticed that their one year old son Brooks' eyes and skin looked yellow, a sign of jaundice. The next day they took him to their pediatrician, which led to a trip to the emergency room at nearby Akron Children's Hospital. A day later, Brooks was being transported by ambulance to Cleveland Clinic Children's, where he was diagnosed with acute liver failure.

Dr. Koji Hashimoto, the Cleveland Clinic director of living donor transplantation, made it clear to the Campbells that they had a few days to find little Brooks a match. Matt was hoping to be the donor, but after six hours of testing, doctors determined he had a blood clotting disorder that disqualified him. The rest of his family was also ruled out because they had the same disorder.

Andrea was 15 weeks pregnant at the time, so she also could not be a donor.  Her brother Grant had flown in and was in the room when they found out nobody eligible was a match to donate their liver.  Grant volunteered on the spot.  By the next day, he was cleared and Brooks was being prepped for surgery.  On November 13, 2019, Grant underwent a six-hour surgery and then Brooks underwent a 13-hour transplant surgery led by Hashimoto that was successful. Brooks is now a rambunctious 3-year-old whose liver is continually monitored by doctors.

Grant did the most selfless thing for his nephew when he underwent surgery and gave his liver to save the young boy’s life.  But here is the most amazing part of the story.  When he had first heard of the dire circumstance and immediately came to be with his sister and her family, it was a very turbulent time in his life. He had recently moved away from his family to Texas, ended a relationship, and had a new business fail, which led to severe depression.

He had gone into isolation and was having thoughts about taking his own life.  When his nephew needed him, he found his purpose, his will to live, he had done something for someone that gave him life. Grant's selfless act helped him as much as his nephew.

If you look at the story, Grant is the hero for having saved his nephew, but if you ask Grant, he will tell you his nephew saved his life.  While this is an extreme example, chesed, acts of lovingkindness, always benefit both the recipient and the giver.

The Rama quotes the Avudraham who tells us that we have the custom to read the Megillah of Rus on Shavuos. Many reasons are offered. One is that Dovid HaMelech was both born and died on Shavuos and the Megillah records his lineage.

But much more fundamentally, why is Rus even part of Tanach to begin with?  This isn’t our question; the Midrash wonders about its significance:

Rav Ze’ira declared: This Megillah tells us nothing either of purity or impurity, of the forbidden or the permitted. For what purpose was it written? To teach how great is the reward of those who do deeds of lovingkindness. (Rus Rabba 2:14):

This would be a great answer if we had never heard of the concept of chesed until Megillas Rus, but have we not learned about the centrality of chesed as far back as the book of Bereishis?  If the only thing Rus teaches is lovingkindness, what does it add to what we already know from Avraham and others?

Rebbe Yitzchak said: I have found Dovid my servant.  Where?  In Sedom.

Isn’t Sedom the antithesis of Chesed? Wasn’t chesed outlawed there under the penalty of death?  How is Dovid found there?

In his wonderful sefer on Rus, Rav Moshe Miller explains that Sedom’s outlawing of chesed didn’t come from a sense of cruelty, but actually from a distorted view of kindness.  Indeed, Rashi says that chesed in Aramaic actually means cherpah — shame. (Vayikra 20:17) It can be embarrassing and even demeaning to be the recipient of chesed.  The people of Sedom saw doing something for another, making them dependent on you, as cruel.  Forcing independence, enabling people to have dignity, was kindness.  Indeed, no matter how well-meaning and well-intentioned a giver is, the recipient of chesed often feels diminished, dependent, even pathetic.

This is where Rus comes in and what she teaches us.  When Rus returns from her first trip to the fields in search of support for her and her mother-in-law, she is asked, from where did you glean:

The poor person does more for the rich person than the rich person does for the poor person. We derive this from Ruth’s statement to Naomi, “the name of the man with whom I dealt today [is Boaz].” Ruth did not say “the name of the man who did something for me, but rather, “I did for him”, [as if to say] “I did so much for him, did so much good for him, all for a single piece of bread” (Rus Rabbah 5:9).

The Malbim says the Chesed referred to here was when we received the Torah.  But wasn’t that Hashem’s chesed towards us?  Perhaps the answer is that we need Hashem and His Torah, but His Torah needs us to manifest in this world.   Chesed is not shameful, it is not one direction, but it is reciprocal and mutually beneficial.

The story is told of a Jew who survived the Holocaust who would say:

You know why it is that I’m alive today?  I was a kid, just a teenager at the time.  We were on the train, in a boxcar, being taken to Auschwitz. Night came and it was freezing, deathly cold, in that boxcar.

The Germans would leave the cars on the side of the tracks overnight, sometimes for days on end without any food, and of course, no blankets to keep us warm. Sitting next to me was an older Jew – this beloved elderly Jew  from my hometown I recognized, but I had never seen him like this.  He was shivering from head to toe and looked terrible.

So I wrapped my arms around him and began rubbing him, to warm him up. I rubbed his arms, his legs, his face, his neck.  I begged him to hang on.  All night long; I kept the man warm this way.  I was tired, I was freezing cold myself, my fingers were numb, but I didn’t stop rubbing the heat on to this man’s body.

Hours and hours went by this way.  Finally, night passed, morning came, and the sun began to shine.  There was some warmth in the cabin, and then I looked around the car to see some of the other Jews in the car.  To my horror, all I could see were frozen bodies, and all I could hear was a deathly silence.

Our rabbis teach that the Torah begins and ends with chesed (Sotah 14a).  Receiving the Torah on Shavuos means not only re-engaging our relationship with Hashem and His laws, but re-affirming our commitment to chesed, not just for the recipient, but for ourselves.